So our branding started out resembling all the previous years, but quickly became memorable.  I finished preparing breakfast, while David went to saddle horses.  The Cowboys arrived and ate breakfast, then we hopped on our horses and set out to gather one of the pastures closest to our house.  We had the pasture gathered and were pushing the mommas and their babies toward the house corrals.  A couple of Cowboys kicked their horses into a lope to get ahead of the cows and hold them at water. This is where it all fell apart.  When Duane kicked Paint, it was a full fledged bronc ride.  Paint apparently hadn’t had enough coffee or was it too much green grass on a brisk morning?  Regardless, he bucked like a saddle bronc at the NFR, head between his knees the whole time. Duane rode him well, until he ended up on tilt.  He hit the ground in a tuck and roll fashion.  We knew there was a problem when he tried to stand, twirled around and collapsed back to ground.

Magic and I kept him company while the Cowboys went to get the Artic cat to transport him.  He knew his pelvis was broken as he could feel some grinding and it hurt to move his left leg.  If he would have been whiny, I probably wouldn’t have been able to stay with him.  But he was normal Duane, his sense of humor was definitely still intact!  On a side note, I did do an excellent job of keeping Magic from trampling him further while we waited.   We got a text to go through to his wife Shelly, but since I spelled his name Dewayne instead of Duane she wasn’t sure who I was talking about.

When the Artic cat came we knew he couldn’t sit and sent them back for a flat bed pick up. Wayne and Randy finally arrived and we removed his pistol and chaps.  He said he was missing a pen he had just acquired.  With Wayne’s EMT expertise we were able to roll him onto a vest and zip it up to stabilize him as we lifted him.  Wayne tripped and almost landed on him, and Randy had a hard time getting off he ground, other than that it went smoothly and  we finally got him loaded.  “Even if I scream keep going,” Duane coached.

I directed dispatch to “just turn at the yellow entrance.”

“He is in the pasture, but we’ll have him out by the time the ambulance arrives.”

He had a posse keeping him company while we waited for the ambulance.   I told him I was glad he had eaten breakfast because they weren’t going to feed him in the hospital.  He told me that he knew I had served quiche this morning and Cowboys don’t eat quiche.  If I would have been quick enough on my feet I would have told him it wasn’t quiche it was egg pie! 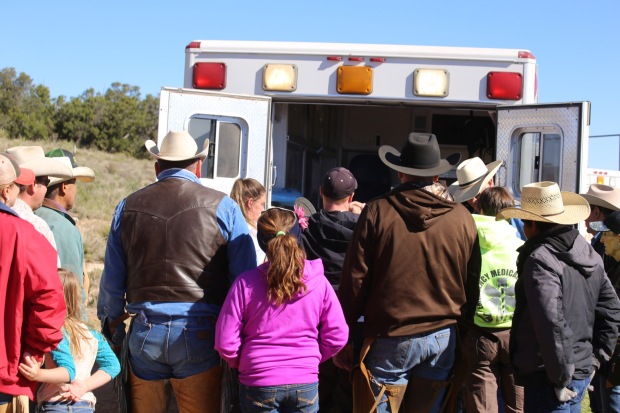 The ambulance carried him off all before we branded a single calf.  The rest of the day went well, however a somber haze hung over us as everyone worried about Duane.  He had pelvic surgery and is doing well, but will be wheel chair bound for the next 8 weeks.